In the early 1960’s, a group of local business leaders put their heads and their pocket books together and came up with a vision for the future of youth hockey for the southeast metro area. They chose South St. Paul, a hot bed of hockey loyalty, tradition and pride, to be the site of one of the first indoor ice arenas in Minnesota. With four walls and a roof, that vision became the Doug Woog Arena, creating a breeding ground for some of the state’s best hockey. 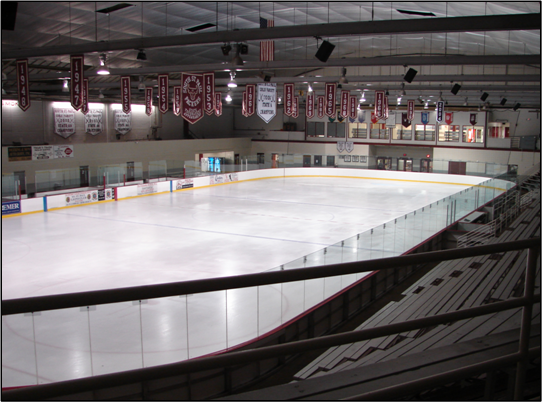 In October 1962, Doug Woog Arena was built as a one-ice sheet facility and was privately owned by Wakota Arena Incorporated, which consisted of 650 shareholders and was named The Cow Palace.  It was built on ten acres of land for the cost of $550,000. A year later, the name was changed to “Wakota” Arena, a combination of Washington and Dakota counties. In 1977, the City of South St. Paul purchased the arena for $375,000.

In 2015, the arena was renamed Doug Woog Arena to honor native hockey great Doug Woog. Woog played high school hockey for the South St. Paul Packers becoming a first team All-State player and leading the Packers to four State Tournaments. Woog went on to play for the University of Minnesota, earning team captain, MVP and first team All-American honors his junior year. Woog later became the head coach of the South St. Paul Packers High School Hockey Team from 1977-1985, and progressed to an assistant coaching position with the US Olympic hockey team in 1984. In 1985, Woog was named head coach of the United States World Junior Hockey Team, competing in Helsinki, Finland. Woog went on to coach the University of Minnesota Golden Gophers Men’s Hockey Team from 1985-1999 and was inducted into the United States Hockey Hall of Fame in 2002.

The arena is over 50 years old now and has undergone three substantial renovations. The first in 1989, with the addition of a large concession stand and lobby area added to the south end of the building as well as an upstairs viewing room. In 1997, Rink #2 was built in addition to two large office spaces and the Community Learning Center (CLC). The third renovation occurred in 2014 with the conversion of the refrigeration system from Freon to ammonia and the remodel of the original rink creating six new locker rooms, an off-ice training facility, community meeting space, and elevated warm viewing areas.

Through the years, Doug Woog Arena was the center of the hockey community as the home of the Suburban Conference. As the years passed, the cities in the conference grew and teams moved to other conferences. Up to the early 1990’s Wakota Civic Arena was home to South St. Paul, St. Thomas Academy, Simley and Henry Sibley High Schools. Currently, Doug Woog Arena is home to South St. Paul High School Hockey, South St. Paul Youth Hockey Association as well as the Great 8 Festival. The Ted Brill Great 8 Festival is a tournament which showcases the best seniors from around the state distributed into eight section based teams.

Doug Woog Arena was also the former home to the USHL team the St. Paul Vulcans before they moved on to the West Metro area and eventually to Kearney, Nebraska. After the Vulcans, Doug Woog Arena became home to the South Suburban Steers in the Minnesota Junior Hockey League. The Steers were sold and the team moved to Bloomington to become the Twin Cities Northern Lights.

Throughout the years, Doug Woog Arena has hosted many dry floor events, such as concerts, dances, graduations, roller derby, circuses, home and garden shows and festivals. The Arena was also proud to host the first ever Minnesota Governor’s Inaugural Hockey Game in 2003.

For over 50 years, Doug Woog Arena has been part of the tradition of South St. Paul hockey. Many players who played here went on to make professional, Olympic and National teams.

Report a Concern
Do you have a concern?
Let us know about it.
Online Payments
Easily pay your bills online.
Notify Me®
Sign up to receive email
or text notifications.
E-Permits
Apply for a permit online.
Employment
Search job openings in the
City of South St. Paul.
[]